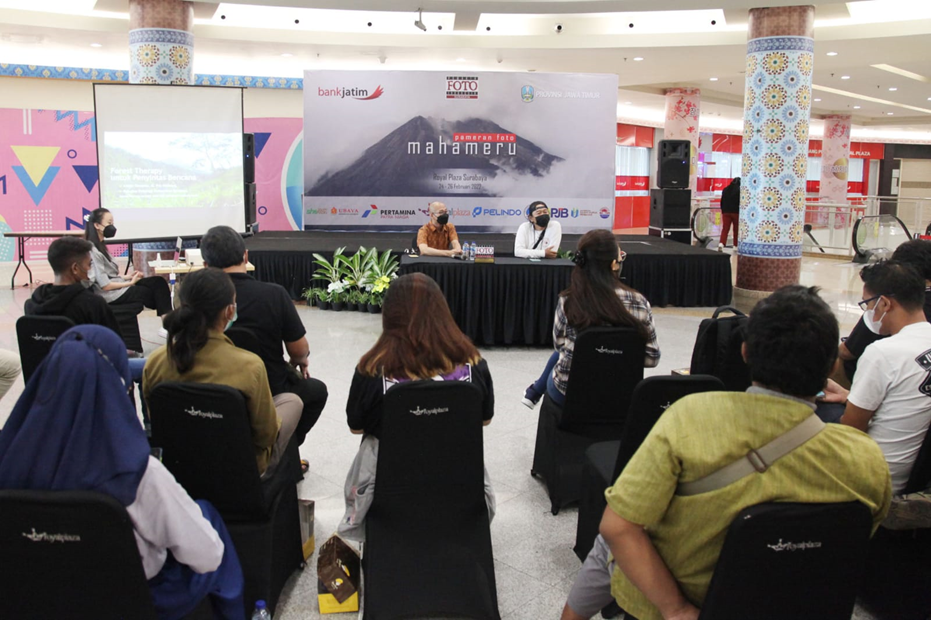 JATIMNET.COM, Surabaya - At the end of 2021, the Indonesian people, especially in Lumajang, East Java, were shocked by devastating natural disasters. Saturday, December 4, 2021, that afternoon, the highest mountain of Mount Semeru experienced an eruption.

The Government of the Republic of Indonesia protects residents and provides health insurance to stakeholders in each area affected. As well as education for children who have to attend refugee camps for a while because their schools are being buried in the mountain's volcanic ash, also called Mahameru.

Seeing this condition, the Indonesian photo reporter (PFI) Surabaya does not remain silent. As a professional organization, they also feel the suffering of disaster victims. They held a Mahameru photo exhibition at Royal Plaza, Thursday-Saturday (February 24-26, 2022). In addition, donations are also opened for residents affected by the disaster.

"Based on the reality that occurred in the field, we as photo reporters will show photojournalistic work that is witnessed by important events throughout the region, including Mount Semeru," explained Dipta Wahyu Pratomo, Chair of the exhibition executive, Thursday, February 24, 2022.

The hope, this exhibition can provide memories to the citizens of East Java and enable them to witness events that occurred in locations from different years that the media may not publish.

The exhibition will feature around 50 photos from 21 participants in PFI Surabaya. In addition, they also raised donations to be distributed to residents who were still in refugee camps.

For donations, you can transfer to the account number 1735007320 Indonesian Sharia Bank (BSI) with a transaction code 451 on behalf of Joko Kristiono. "We convey all the donations to residents who were affected through Mr. Thoriqul Haq, Lumajang Regent," he explained.

There are many series of events to enliven the exhibition. Starting from webinars, talk show, and workshops to book reviews. "On the first day, after the opening, people are invited to join the webinar by Mata Magazine," said Suryanto Putramudji, Chair of PFI Surabaya, when confirmed on a different occasion.

On the second day, Friday, February 25, 2022, continued this Radar Surabaya photo reporter, there is a talk show themed "Trauma Healing". The resource person is Listyo Yuwanto, a Psychologist and lecturer at the University of Surabaya Faculty of Psychology (FP Ubaya).

"On the last day, we have a book review of our senior reporter, Trisnadi. There is also a workshop about the experience of friends during a disaster, especially in Semeru," concluded this bespectacled man.