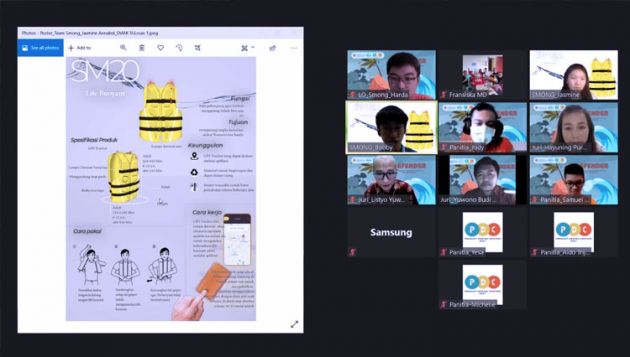 Product Design Contest (PDC) is a design competition or product design at the national level which is held every two years and is attended by participants from high school / vocational students from various regions in Indonesia.

Eight teams that passed as finalists competed to present their best product designs to judges and online visitors on Saturday (30/1/2021).

Head of Ubaya TMM Study Program, Arum Soesanti, S.T., M.T. in her opening remarks, said that the theme Defender was chosen after seeing the condition of Indonesia as a country prone to natural disasters. According to her, through this activity, PDC can become a forum for the younger generation to channel their creative ideas and innovations in designing safety equipment that can be used in dealing with natural disasters in Indonesia. Here we learn to realize a product by learning how to design the product, the manufacturing or manufacturing process, and the production system,” said Arum Soesanti.

Through PDC, continued Arum, as the younger generation and the nation's successors, it would be nice if we could care about helping solve the nation's problems. Good luck to the finalists because you are amazing,

In this competition, participants must show their ability and creativity in designing a product by considering the aspects of function, aesthetics, ergonomics, maintenance, and safety.

Participants who take part in the 2021 PDC competition are tasked with designing safety equipment. Safety equipment is a tool used as a protector to prevent, overcome or cope with natural disasters before, during, and after they occur. Participants can take examples of natural disasters such as volcanic eruptions, floods, tsunamis, landslides, etc.

After the booth visit session, each team displayed a video or presented the product design concept made in front of the judges and online visitors. Each team was given about 10 minutes to make a presentation and ask questions.

One of the judges, Yuwono Budi Pratiknyo, expressed his pleasure to see the younger generation's enthusiasm in participating in the competition even though it was held online. He hopes that later the concept of ideas and creativity of participants can be better developed and realized into products that the wider community can use.

“I hope that through this PDC, later, what they make will not only be in the form of concepts but can be realized in actual products. So that later it can be used well in the community for the benefit of natural disaster management,” concluded the jury of the product design competition Ubaya. (*)