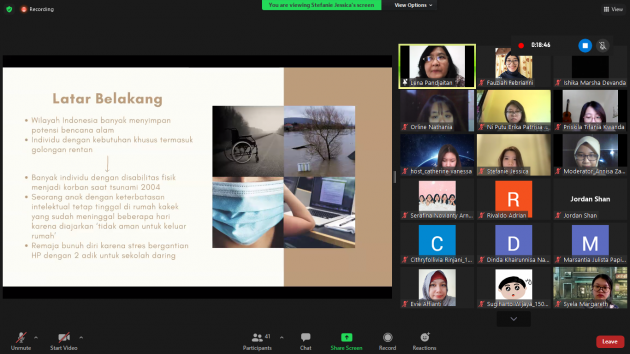 "Indonesian territory is prone to disaster," said Lena, opening the material session. She explained that natural and environmental conditions in Indonesia pose threats such as earthquakes and volcanic eruptions. “Everyone is vulnerable in this catastrophic situation without exception,” explained Lena. By knowing the various potential threats that may occur, Lena emphasized the need for efforts to overcome the risk of disaster impacts. "Especially the elderly group with limited mobility and children whose cognitive abilities have not yet been formed," continued Lena.

In addition, Lena emphasized that children with special needs are the most vulnerable group in disaster situations. Children with special needs include people with physical, mental disabilities, multiple disabilities, learning difficulties, and the potential for special intelligence. "Even so, they also have the right to learn and be independent, just like other children," explained Lena. She added that within the scope of education, teaching staff must also be able to identify and adapt to students with special needs. "This is done so that students get the provision to prepare themselves for a crisis," she continued.

Furthermore, Lena explained that there needs to be various optimal supports in schools with students with special needs. "Infrastructure such as wheelchair paths, push exits, and protected table ends will make it easier for students with needs in disaster situations," explained Lena. Teachers must also be able to teach in a fun method. "Thus, the information conveyed will be easier for children to remember," he said. In addition, students are also expected to be familiar with terms in disaster mitigation. "Especially for children who have difficulty receiving sensory information, this needs to be taught and more emphasized," explained Lena.

Before the session ended, participants were given the opportunity to ask questions, one of which was I Gusti Agung Ayu Amritashanti. "How to develop independence and empowerment of students with special needs in disaster risk reduction?" she asked. Lena replied that it also requires the ability of external parties. “Teachers and parents can help, but the end goal is to achieve independence,” explained Lena. She also does not deny that with varying degrees of disability, it is possible that independence is not achieved optimally. "Even so, external parties still have to provide support and teach these students that disasters can come from anywhere," concluded Lena.