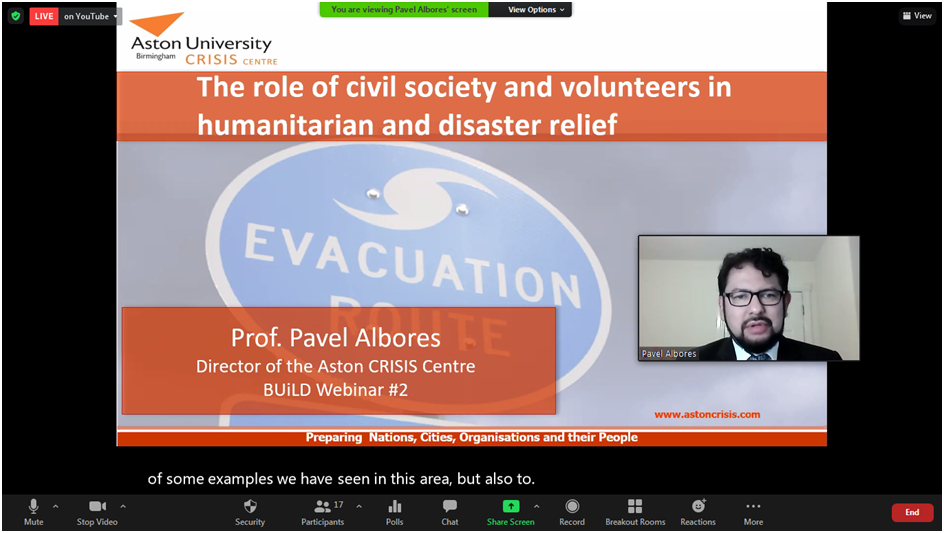 Speakers from Three Countries Speak at the Ubaya-BUiLD Webinar 2

After the opening, to 50 participants, Prof. Albores began the webinar with his presentation titled "The Role of Civil Society and Volunteers in Humanitarian and Disaster Relief". He said, "According to UNISDR (2012), from 1992 to 2012, 4.4 billion people were affected by disasters with almost 2 trillion USD in damages, and 1.3 million people killed worldwide. While last year in 2019, 396 natural disasters were recorded in EM-DAT with around 11 thousand deaths, 95 million people affected, and 103 billion USD in economic losses across the world. The trends in the number and impact of disasters and the massive scale of recent global relief efforts have brought growing attention to the need for effective and efficient disaster management.

Disaster management aims to provide total prevention of disaster, effective rescue and treatment of disaster-affected populations, mitigating the severity of the disaster and controlling the situation and causality identification, classification and providing the necessary relief items the affected people".  He added that civil society and volunteers play an essential role in effective and efficient disaster management. There are several types of volunteers: citizen-driven disaster relief, survivor-led humanitarian response and reconstruction, and spontaneous volunteers.  In his presentation, he also shared his experience about community resilience on an earthquake in Puebla, Mexico, in 2017.

After Prof. Albares, Prof. Dr. Oktavian shared his experience about community resilience on a tsunami in Tanjung Lesung, Indonesia, in 2018. "Many disaster aids were robbed before it reaches the victims, but luckily the Indonesian Police and Army were able to cope with the problem a day after the disaster. Seeing the problem, community resilience is very critical in a disaster. At that time, the university that he leads, President University, helped strengthen Tanjung Lesung by making it a tourism estate that creates many jobs. With a better economy, Tanjung Lesung people can send their students to school or better education, which will avoid robbery during a disaster. Moreover, the university also approached community leaders in Tanjung Lesung because people there admire community leaders and the leaders can control the people, including during a disaster," he said.

The webinar was ended by Ass.-Prof. Dr. Margit Raich who shared her experience in the PSYcho-Social Support in CRISis Management (PsyCris) Project, an international multi-disciplinary project funded by the European Union consisting of ten partners from Germany, Spain, Israel, Lithuania, Luxembourg, and Austria. The project objective was to contribute to the improvement of psycho-social support in crisis management by integrating different disciplines. She underlined that from the project, it could be learned that each disaster is characterized by event-specific conditions, pre-impact conditions, the existing physical and social vulnerability of the people affected, and the standard of the emergency system. As such, different recovery needs have been identified, depending on the people affected and the effectiveness of crisis management procedures depends on some contingencies (e.g., not only how accurately one system is implemented, but also how well a system is aligned within cultural (sub)systems. After the three speakers' presentation, the webinar was concluded with a Question and Answer session, where many participants asked questions to the speakers.